Please fill out the application now

2 weeks FREE access to reshape your health and fitness

Why the change of life?

I’ve been asked a lot recently by friends, why I’ve been posting so much on social media about my workouts and what this new business I’m involved in is all about, normally followed by a question as to why I’m involved in it?

I guess it’s a good question and I haven’t really answered it before, I sort of skipped the answer. I guess people have asked me because from the outside it looks like I’ve built a successful business and lived a good life so why the change of direction?

Zoë and I moved to the Caribbean to live at the age of 19 and 21 and set up a business teaching children to swim and play football. Duncan and William (our younger brothers) moved out a few years later when they turned 16 and got involved with the business. We built a very successful business and lived a very good life.

When I first started the business I was really passionate about it, I loved teaching children a life skill and giving them the tools to succeed in other areas of life. However as the business grew my role within the business changed and I went from being a teacher/coach/mentor to working more on the business. My role became more desk bound as I worked on the marketing and accounting side of the business and looking at ways for us to grow it. I enjoyed this role too but as we became more successful other businesses started to copy us and set up in competition. I didn’t mind the competition, in fact I thrived on it, it meant we had to innovate and come up with new ideas to grow the business, which we did successfully. However, living on an Island with a population of 60k people there is only so much innovating and growing you can do and as the competition became bigger the market share began to dwindle and I felt we had taken the business as far as we could in terms of growth.

The thing I struggled with most though was having no one outside the family to talk to about the business, no one to offer ideas and support, it was all our own making, which is something to be proud of, but I also think to grow you need to learn from other people and their experiences.

I was also feeling unfullfilled as I was no longer teaching anyone anything and I felt I had a lot to give still but the business as it was now didn’t allow for me to do that. I guess you could say I lost my purpose and drive. So it was a combination of stress and loss of purpose that I started to eat and put on weight.

It came to a point where I needed to lose weight, I’d put on about 2 stone and didn’t really know how to lose it. I’d been going to the gym but my nutrition sucked and I didn’t know what exercises to do. I thought I could lose weight and build muscle by running a few times a week and lifting weights at the gym, but really I didn’t know what I was doing.

Zoë had been doing these homeworkouts for a couple of years and she had gotten really excited about them, I was skeptical at first and thought they can’t be that good. But I did notice Zoë was getting results and I wasn’t so there must be something in it, so I decided to give it a go.

I’m so glad I did because I took the weight off in about 2 months and was feeling much more positive about life again.

By this point Zoë had started becoming a coach with Beachbody when it launched in the UK and again I was a bit skeptical thinking it wasn’t a traditional business, network marketing is a scam, why can’t we just do it ourselves? Nice, positive thoughts!!!!

But Zoë , not one to always listen to her big brother decided to continue anyway. She knew that meant I’d have to join her anyway, because as a family we have always been in business together, so she had me trapped!

I still wasn’t convinced by it all until Zoë won a trip to the annual conference in America and dragged us all there so we could see what it was all about. Ok she didn’t have to drag to hard, I wanted the holiday!

Anyway when I got there I was blown away by the scale of the business, there was a stadium full of coaches. I was expecting about 2k people not 30k!

But it wasn’t the number of people that won me over it was how there was such a big sense of community and how so many people were all living the same dream, sharing the same mission and all supporting one another to succeed. It was this that finally swung me into this being a business opportunity that can work. It had everything I was looking for and had been missing in my life.

Firstly it kept me fit and active and there was a sense of teamwork and community I hadn’t had since I stopped playing team sports.

On the business side of things there was a road map to success to follow, there were so many people who had achieved so much and we could just follow the system, and even better than that they were more than happy to share and mentor you. This was heaven to me, as I’d spent years trying to figure out new ways to market and innovate and didn’t have anyone to learn from, here everyone was giving you ideas and things that have worked for them and it was all free, it didn’t cost thousands of pounds to go to a seminar to learn! The accountant in me was even happier!

I felt like I’d finally found what I was looking for. 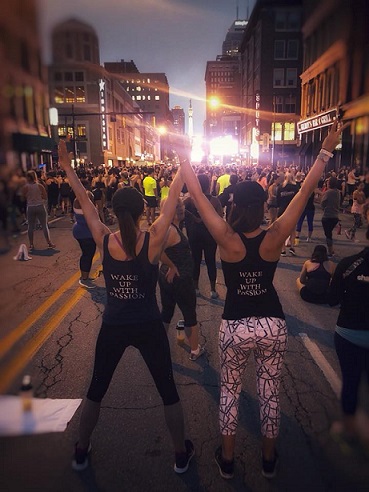 On Monday 25th – Wednesday 27th March, Zoë and Duncan will be on the success club 2018 rewards trip they earned. A Caribbean cruise on the Harmony of the Seas.

They will be going live in our facebook group throughout the holiday telling you how they earned the trip and how you can be there too, next year. They will also be sharing their coaching journey’s and answering any questions you have about getting started on our next coach university starting in April.

Join Our Sneek Peek into Coaching

Intu Fitness is an online health and fitness community that inspires people to take back control of their life through following fitness and nutrtion programmes whilst being held accountable to their goals. We mentor and support people to take back control of their lives, working on mindset, mindful nutrition and physical fitness. We want you to wake up with passion, abundant energy and a positive outlook on life.